As I travel the world hunting for critter from my list to film, I am constantly amazed with the level of camouflage thats species have evolved in to. This article might be specifically about interesting shrimp camo, but it is prevalent all over the marine species kingdom.

I like to call myself a full time critter hunter, and as a hunter for interesting marine critters, I get a little extra thrill when I am able to spot a tiny creature, even after eon of evolution has tried to prevent me from doing so.

I find there are three types of fish in the world:

1: Fish that have great camouflage and try to hide from prey.

2: Fish that have bright colors and try to advertise to predators that they are toxic and not good food. Such as a nudibranch.

3: Fish that do neither, have no prey, and don’t care. Like a whale.

In this article I’m going to talk about some of the most awesome hidden creatures I run into, specifically in South East Asia, although some a also located in other regions.

My Favorite Camo masters in the Shrimp World

There are so many thousands of shrimp species in the world, that I could never mention them all. But what I love about shrimp, is the huge variety of patterns and shapes and colors they can be found in.

Nearly every coral or seastar or plant in the ocean has a similarly patterned shrimp living on it! 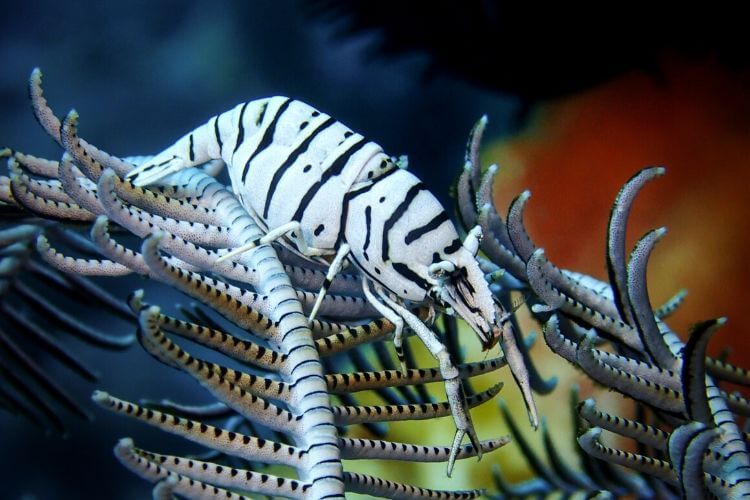 There is a lot to love about crinoid shrimp. Crinoid are feathered seastars, and as you can see from the photo above, shrimp change color ata young age to closely match whatever star they find and call home.

I am always amazing at how exact some of these guys are in pattern! They just look like another arm or leaf. They are so perfectly camouflaged that they can be hard to find, even when you know where to look.

Luckily for us lovers of unique critters, crinoids come in many colors, and so do the crinoid shrimp! 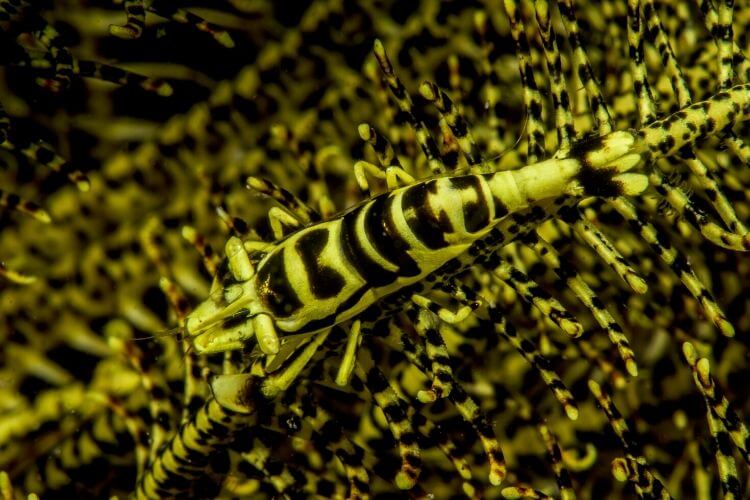 The reason is, that each species also has different variations in patterns and colors, making it even more confusing, unless you’re a marine biologist who studies these specifically. 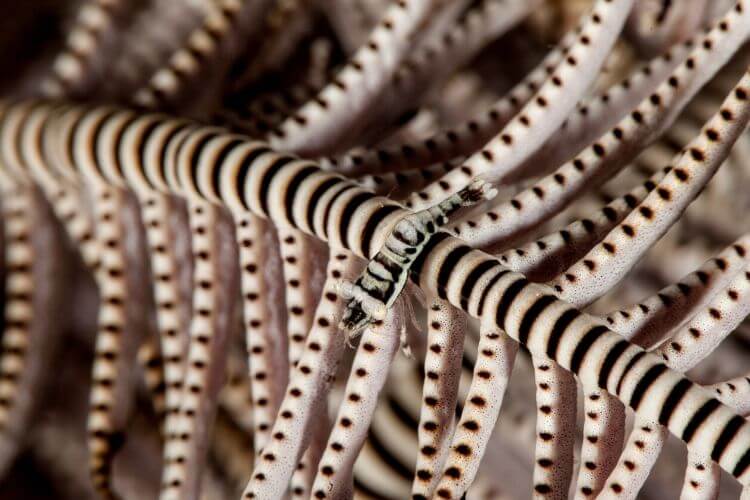 We can’t show you all the types of crinoid shrimp here, so stay tuned and we will be publishing a photos essay soon, showing lots of varieties! 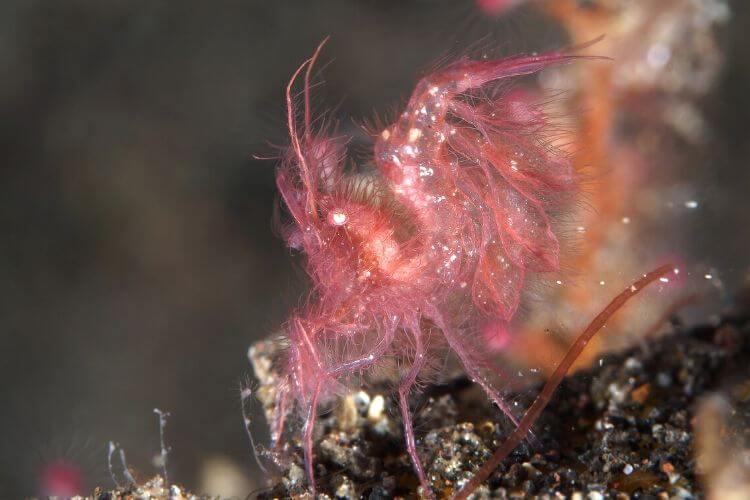 If you are lucky enough to ind one of these, it’s a big accomplishment. Also sometimes called the hairy shrimp, its no wonder how they got their name.

Found in shallow coral areas around the tropics, especially Indo Pacific, this tiny fella has evolved to blend in perfectly with sea moss or red algae.

As a diver I can attest, that when these guys are hiding in the middle of a small patch of red algae, these guys are nearly impossible to see. It is only when they move or are hunting, that one might be able to spot it. 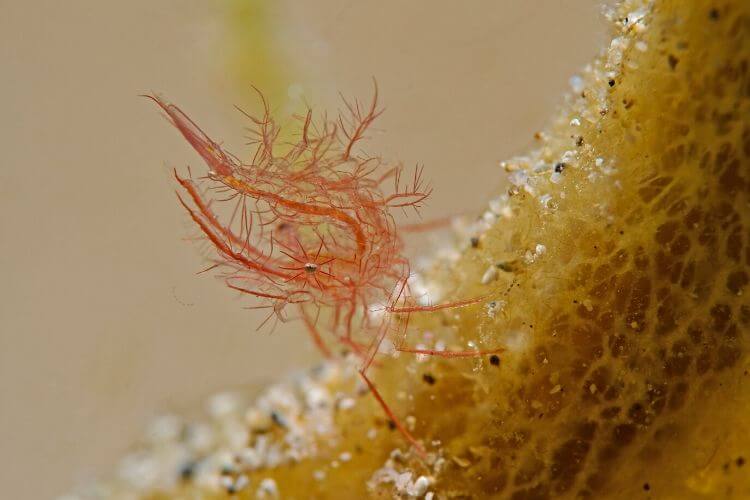 How can one expect to find a ball of fluff, the size of a marble, on the bottom of the ocean?!

Also, it should be noted, that the orangutan crab has the exact same style red fur, that allows him to blend in with that same algae. I wonder if they are friends..? 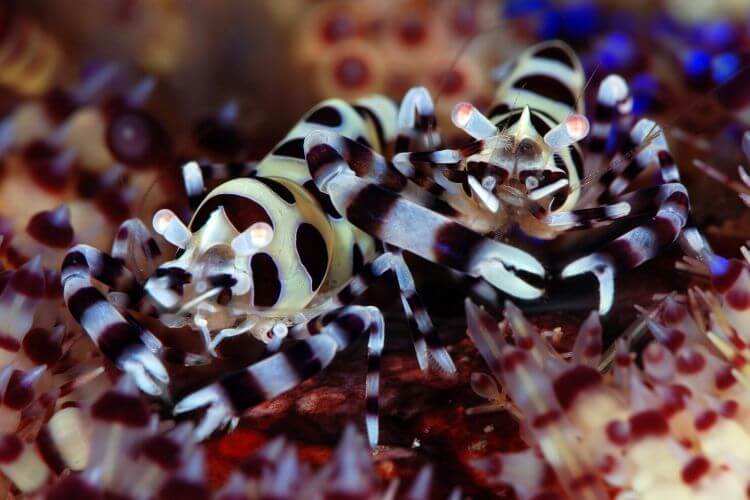 Talk about over-kill, when it comes to safety. These guys double up on the protection!

In the first place, these guys live permanently, on the backs of fire sea urchins. Fire urchins are big and stabby and poisonous, so you would think being able to hide in amongst their spikes would be safety enough. I mean who would go hunting in there? No one.

But that wasn’t enough for them. They also had to blend in. They have adapted to blend in perfectly with the colors and patterns of the urchin. This symbiotic friendship is unique, and awesome to see. 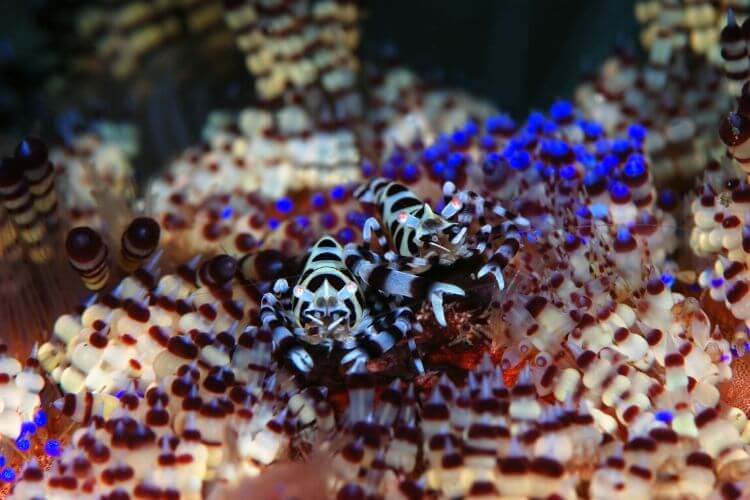 And if you see one coleman shrimp taking a ride, there is almost always a second. So keep an eye out for its mate.

Take a look at this next photo, and tell me what you see. 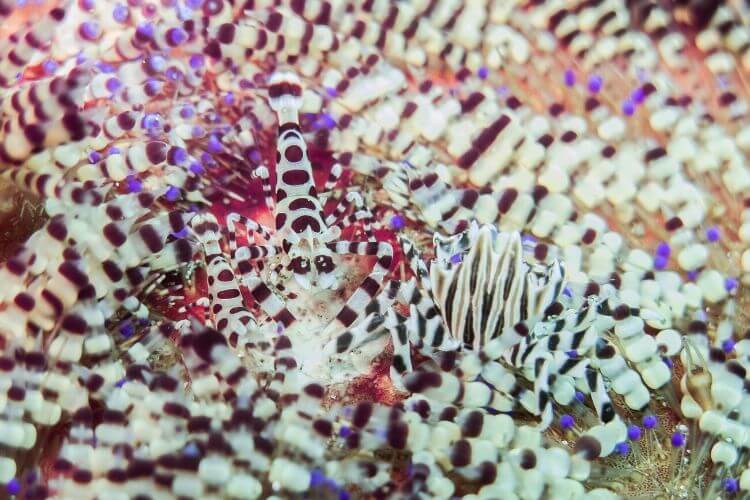 Do you see the two coleman shrimp in the middle of the fire urchin? Well, do you also see the zebra crab just to the right of them?

Zebra crabs are also camo masters, and also share a ride/home on top of the fire urchins. 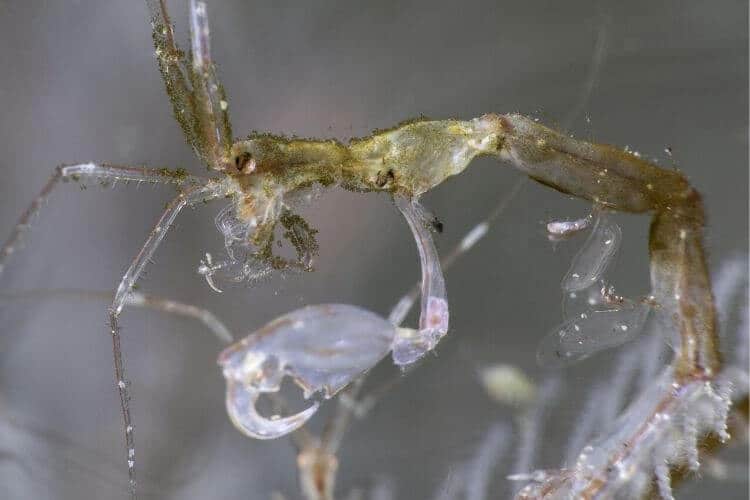 Skeleton are so tiny, that they really don’t need any camo to hide from me! But, frogfish and other predators don’t have that problem.

Skeleton shrimp are so unique, tiny, and completely transparent, that it’s a wonder that anyone has ever seen one! 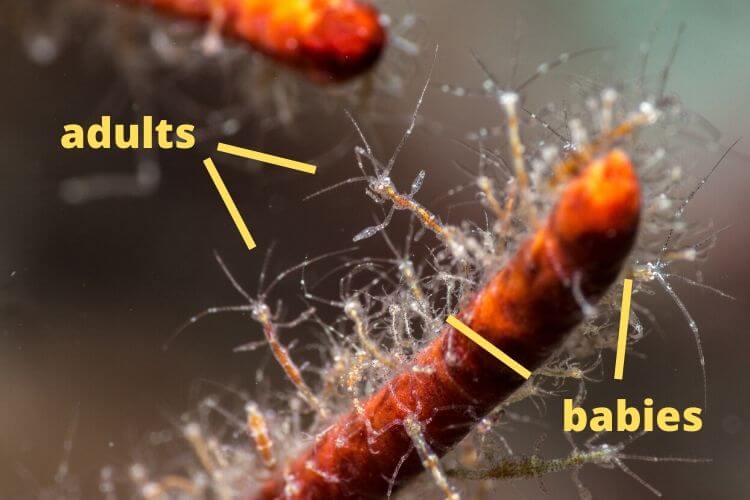 When I was making my documentary about marine species in Philippines, I was filming a tiny hairy frogfish, and later when I looked at the footage I saw that the frogfish baby was actually hunting skeleton shrimp! They were so tiny that I hadn’t even seen them at the time!

Skeleton shrimp aren’t just camo masters because they are translucent. They also have bodies and features that make them look like certain soft corals, like xenia or hydroids, where you can sometimes find the hanging out. 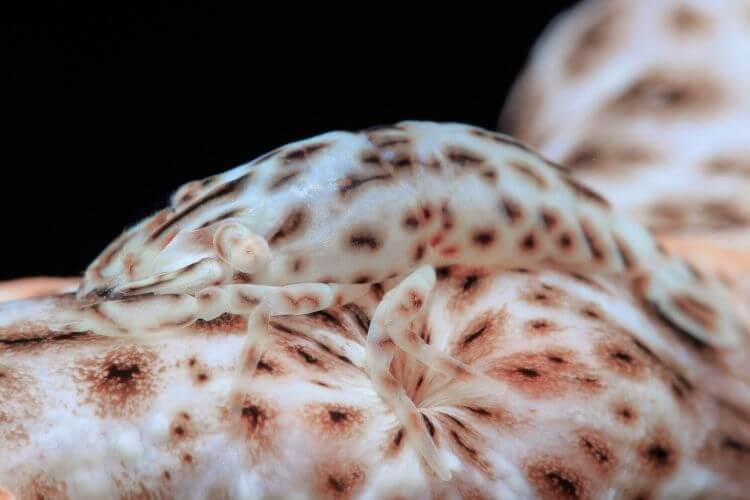 Is this a shrimp, or a Rorschach painting? Little is knowns about the leopard anemone shrimp, especially by me, but I do know I have been lucky enough to see one on occasion, are Philippines.

They are just another example of how amazing shrimp camouflage can be in our world!

There are a number of species that like to live in sea anemones, not just clown fish, and the leopard is one of them.

So that’s about it! Of course there are countless other wonders of the shrimpy-variety, and if you want to learn more about different species, go check out our Marine Species Directory, and find all you want to know!

Want to be a contributor? We are always in need of photos, specifically of rare species. Send us an email, and you can get your own contributor profile page on this site, while at the same time helping us educate the world about our wonderful marine critters! Hit us up at justin@artofscubadiving.com

It’s not just shrimp photos and information we are after either. Check out our whole species directory to see what we have so far, but also keep in mind that we are adding more and more each month! So let us know what you specialize in, or how you can contribute, and we will make you a part of the team! 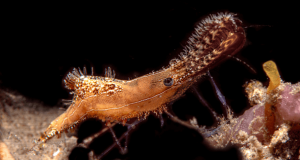 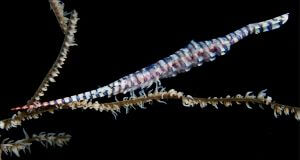 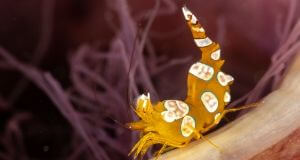 Other Marine Species in our Directory 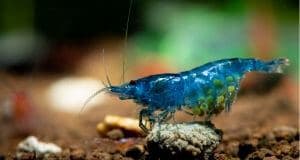 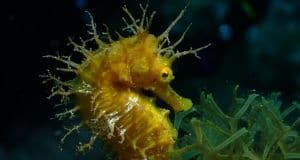 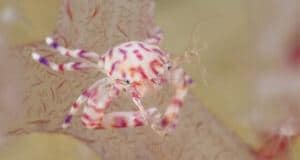