I’ve been living and diving in Grenada on and off for the past 6 years and in that time, the numbers of lionfish in the Caribbean has skyrocketed.

Despite the best efforts of hundreds of dive shops and eco-minded ocean projects around the region, the invasive lionfish species has been wreaking havoc on the reef systems of the Caribbean for decades.

As a diver myself, I find it alarming to see just how many lionfish you can see on a single dive in the Caribbean. Whether I’m in Grenada, Barbados, Cuba, Mexico or Belize, there are lionfish across all of the west indies islands and into the Gulf of Mexico and it’s not getting better anytime soon. 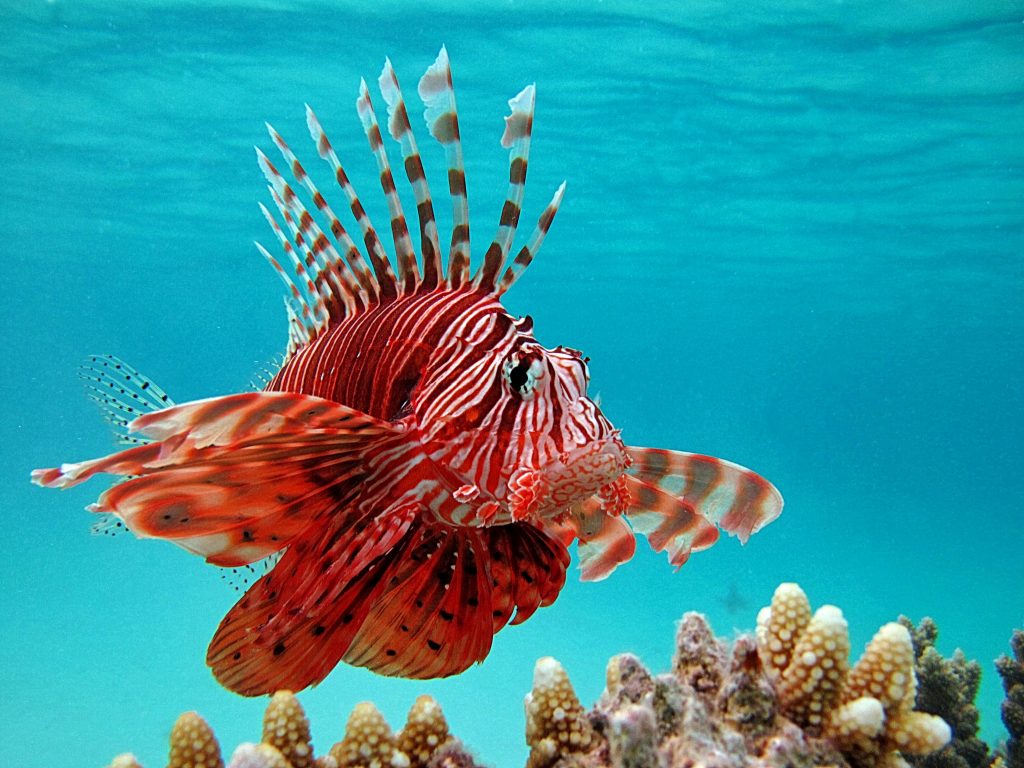 In this post, I’m going to cover a bit about the history of lionfish in the Caribbean, what eco-companies and dive shops are doing to try to help, and how you can do your part to help curb this incredibly invasive species from destroying the beautiful reefs of these ecologically blessed islands.

What is Lion Fish?

They have long been a showstopper for both divers and aquarium collectors thanks to their incredibly brilliant colored stripes and their long, venomous spike-like fins.

They’re not a very large fish, usually not growing larger than 18 inches in length, while juveniles can be as small as an inch long or less.

How Bad is There Sting?

I’ve heard of grown men crying from the sting of the lionfish. The owner of one of the dive shops in Grenada told me that the sting was so bad that he was unable to sleep for 24 hours.

The toxin they emit from their spines when they are poked is rarely fatal, but it is always extremely painful and the aftermath can be extreme pain, swelling, bleeding and blistering.

While there are some myths that lionfish can shoot their spikes and that they’ve been known to charge at potential-predators in an aggressive manner to spear them with their venomous spines, this just isn’t true.

You have to touch a lionfish’s spine in order to be injected with their venom and most cases of serious injury are from fishermen trying to release them from nets.

What To Do If You’re Stung

If you do get stung, there are a few steps you can take to help ease the uncomfortable journey you have ahead of you.

1. Remove Any Spines From The Wound

Sometimes spines can break off in the victims flesh, causing extended and magnified pain. Immediately after being stung, check the wounded area for any spines that may have broken off in the skin.

Because the spines are so strong, it’s unlikely that this would happen, but if you find any broken pieces in your skin, be sure to use a sanitized pair of tweezers to remove any small pieces.

Immediately clean the affected area with water and alcohol if you have it to stop the growth of bacteria at the point of puncture. Reef fish can have parasites and bacteria on their flesh, so this is an important step.

To further battle any potential harm from bacteria or parasites, apply Neosporin or another antiseptic gel to the wound and allow it to set for 10 to 15 minutes.

Benadryl can help counteract any potential allergic reaction to the sting of the lionfish. If you can get your hands on an antihistamine, take it as soon as possible after being stung.

You’re in for a long ride! If the pain continues for longer than 12 hours, increases after the first hour or the affected area begins to swell beyond a normal amount, seek medical attention right away. 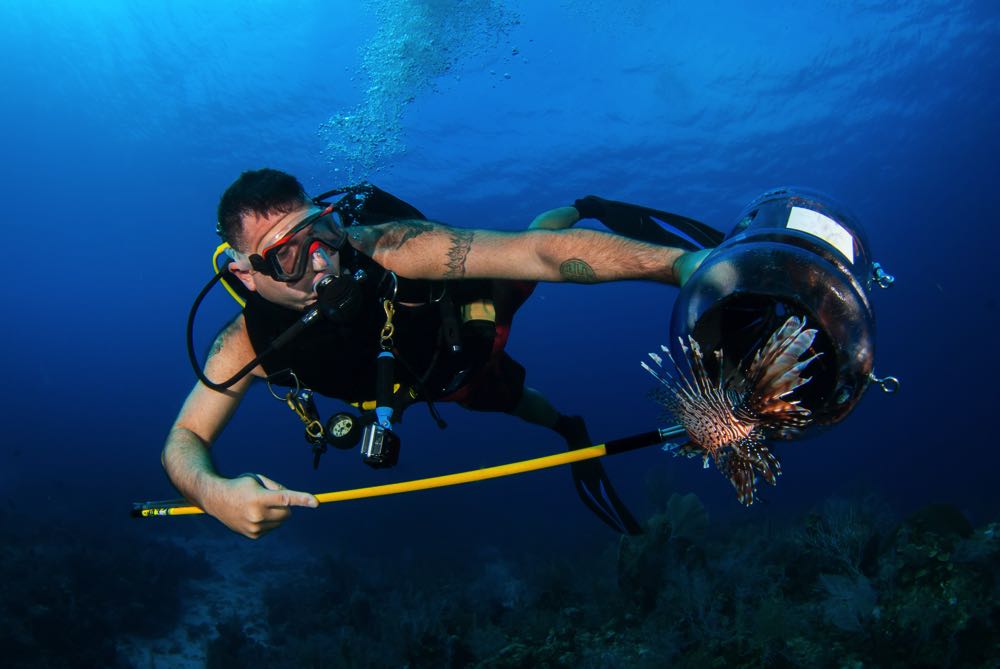 Lionfish are venomous, not poisonous, and the only place you find their venom is in their long, protruding spines.

When you cut off their spines (best done with a sturdy set of scissors), you have effectively devenomized the fish and it is then safe to handle and eat.

Why Are There Lion Fish In The Caribbean?

According to SmithsonianMag.com, in 1985, the first confirmed sighting of a lionfish in the wild was spotted in the reefs of South Florida, but it wasn’t until the early 2000s that there were frequent sightings in the US and Bermuda.

Because lionfish are such a popular aquarium fish for hobbyists, it’s believed that the first set of lionfish were probably released into the Atlantic intentionally.

While there’s no concrete evidence to support this theory, it seems like the only logical way that the species could’ve been introduced to the wild. 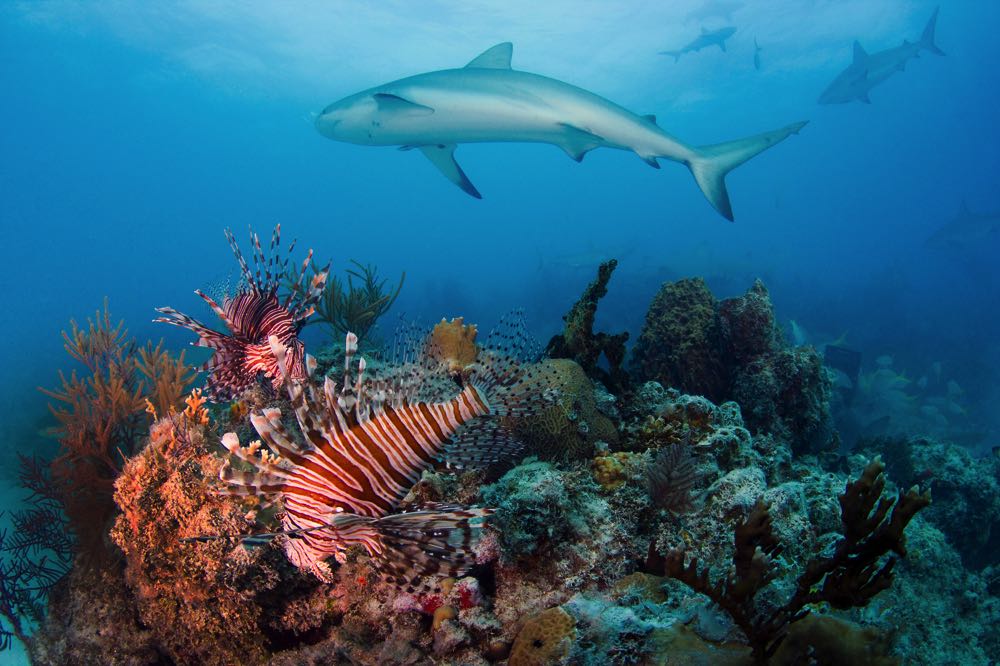 Why Are Lion Fish Considered Invasive in the Caribbean?

In their natural habitats of Asia and the South Pacific, there’s really no problem with the species. This is because they have natural predators there such as eels, sharks, grouper, cornetfish and frogfish and other species of scorpionfish.

But those predators have all built up an evolutionary immunity to the lionfish venom.

In the Caribbean, no such tolerance has been built up by any of the predatorial reef species and today, the population of lionfish has been able to grow without any intervention, besides the odd diver or spearfisher killing them to try to help stop the infestation.

There are three main reasons why lionfish in the Caribbean are considered an invasive species. 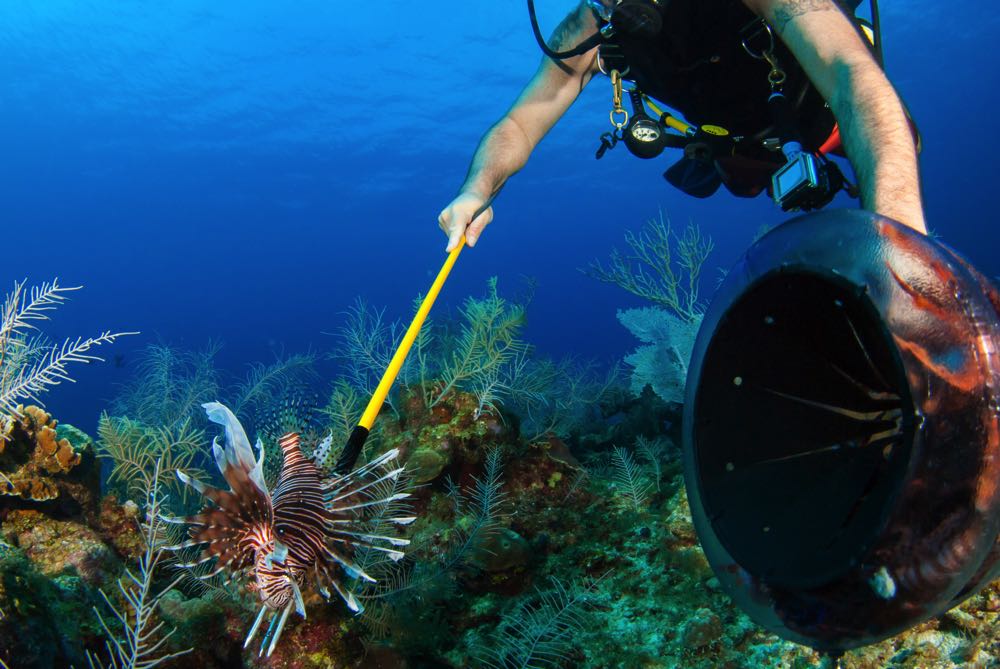 1. They Breed Faster Than Any Species in the Region

In the most favorable possible conditions, female lionfish can lay eggs every 4 days, totaling as many as 2 million eggs every single year.

These eggs are also some of the hardiest in the ocean, meaning that more lionfish are born and survive per spawn than most other species on the reefs.

On top of that, lionfish males are sexually mature within a year and can live to be older than 15 years.

2. They Feed On Grazers

The favorite prey of lionfish are grazers. Grazers, such as parrotfish, goatfish, wrasses, surgeonfish & tangs, and many others, are the lifeblood of reef systems in the Caribbean.

They help clean algae from the reefs and without them, the reefs will smother and die.

The effects of lionfish populations have already been made evident by the extreme growth of algae measured on many of the reefs where their numbers are highest.

Not only is this disastrous for the other species of marine life that rely on these reefs for shelter and food, but the reefs themselves provide as much as 80% of the Earth’s oxygen supply.

On top of that, over 42 million fishermen, dive instructors and tour operators in the Western Atlantic Basin depend on the coral reefs to earn a living.

Lionfish can expand their mouths to be 30 times the normal size and they have been known to eat prey that’s more than half the size of their own bodies.

They’re also not picky eaters. Basically, they eat everything in sight, and because their favorite prey are the reef’s most important species, it means that the Caribbean, The Gulf of Mexico and more recently, The Mediterranean are in deep trouble.

In these places, the lionfish has no natural predators and their numbers are climbing every day. 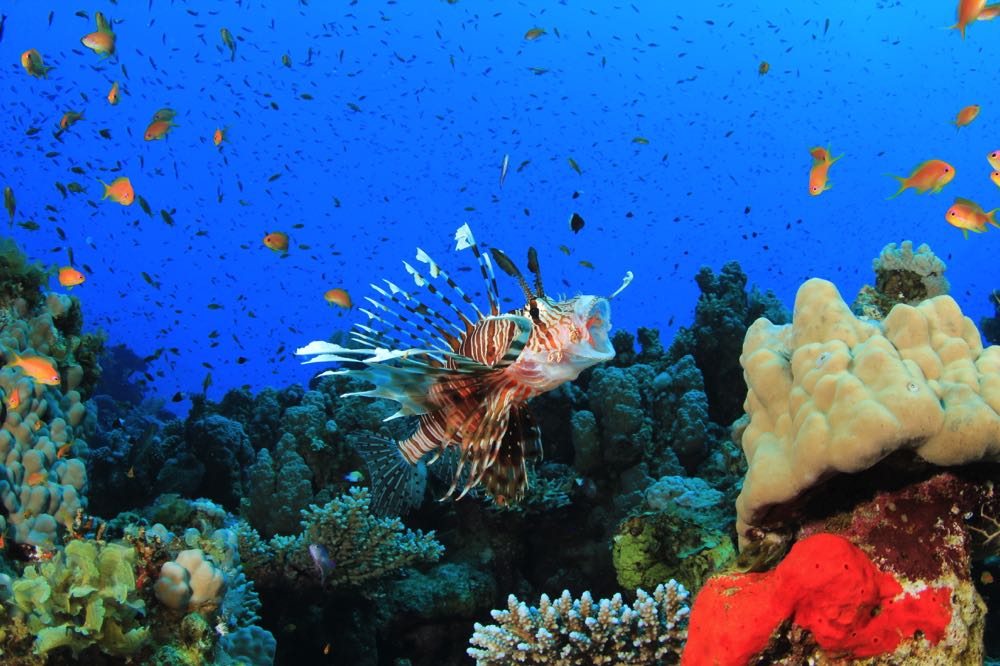 Are Lionfish Considered Invasive In Their Native Reefs?

Because lionfish have plenty of natural predators in their native reefs, they aren’t generally considered invasive there.

Sharks, groupers, and eels help to keep their numbers down and keep the balance on those reefs.

It’s only when the lionfish are able to flourish without predators that they become invasive on a reef system.

Because they breed so quickly and eat the reef’s most valuable grazers, including restaurant favorites like crab and lobster, they are highly invasive on the reefs of the Caribbean and in the Gulf of Mexico where they are not a native species.

How To Help Battle Lion Fish in the Caribbean

With the species laying so many eggs and eating so many of the reef’s valuable grazers, there’s little time for ecologists and marine biologists to act on this growing problem.

Many foundations have teamed up with local dive shops to help the reefs battle this growing crisis. Here are some ways that the locals are trying to help and how you can too.

You’re not likely going to catch a lionfish on the end of a fly rod, that’s for sure. They are a difficult fish for traditional fishermen to catch and if you were to land the lionfish this way, putting it into a net and releasing the hook could be a very dangerous process.

Instead, the best way to catch lionfish is by spearfishing.

In the Caribbean, many of the dive shops are sending out extra dive masters onto their dive trips with a spear gun in hand.

Having a spear gun and a sturdy, puncture-proof cylindrical tube is the best way to catch lionfish in the wild without getting stung by their poisonous spines.

I joined a Lion Fish Lime in Grenada, which was basically a party put on by the local dive shops and marine conservation projects in the country.

In the morning, we all headed out to spear the lionfish and in the afternoon, we returned to the beach for a big lionfish barbecue.

Which brings me to my next point…

One of the best ways that you can help battle the growing number of lionfish in the Caribbean is to eat them. Don’t worry! They’re actually not poisonous, once you remove their venomous spikes.

Their flesh is white, flakey and actually quite delicious and there are some tasty lionfish recipes you can try.

The first time I ate lionfish was at the Lion Fish Lime in Grenada and I was surprised. The chefs made lionfish tacos and lionfish fillets.

Many of the restaurants in the Caribbean will serve lionfish as well. If you see them on the menu, definitely order it! Not only will you have a great meal, but you’ll be helping the conservation efforts on the reefs in the region as well.

Train Predators To Eat Them

Another way that marine conservation efforts have been trying to curb the growth of lionfish in the Caribbean is by feeding them to the local sharks, eels, and groupers to try to tempt them to hunt the lionfish in the wild.

There are reports of divers trying to spoon-feed lionfish to sharks and grouper in the wild in an attempt to change their eating habits, but there’s little to no evidence that this approach will actually work. 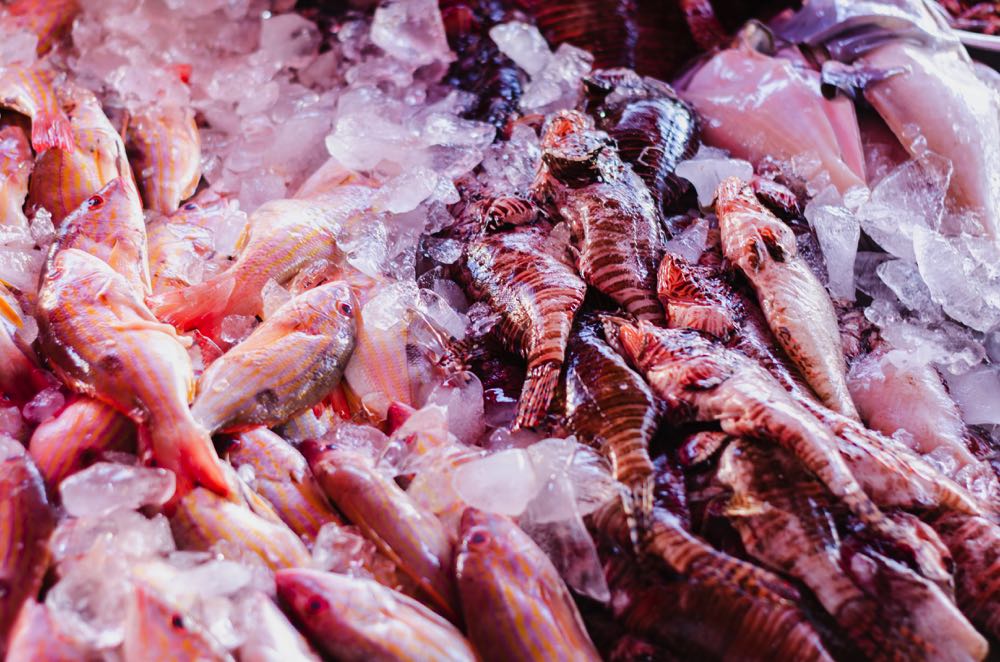 Report Them To Your Dive Master

If you’re diving in the Caribbean, or anywhere that the lionfish is not a native species, then it’s always a good idea to inform your divemaster of any lionfish you see on the reefs.

In many cases, divemasters are instructed to keep counts of the lion fish they see and sometimes, there may be a diver that will come back in the day to hunt reefs where high counts have been made.

Lionfish are a growing problem, not only in The Caribbean and the Mexican Gulf but more recently in the Meditteranean Sea. If divers, dive shops, snorkelers, and consumers don’t start taking the threat seriously, then our reefs could be in serious danger.

The reef systems of the world not only provide millions of jobs to fishermen, marine biologists and tour operators, but they are home to billions of fish and they provide our planet with the majority of its oxygen.

By hunting, fishing, eating and reporting lionfish, you can do your part to help curb this war with what has now been dubbed, “the rat of the reefs” in the Caribbean.

I hope that this article will help you to better understand why lionfish are such an invasive species reefs where they’re not natively found, and how you can help!